Thoughts on assigning players to tabletops in team building exercises

How do you put teams together and meet your goals for a meeting?

We’ve been playing team building games for large groups for 20+ years now and repeatedly bump into the issue of how to assign people to tabletops or teams. Even if that is desired, there is no simple solution to it, but here are some thoughts and ideas that seem to help us reach decisions about what to do and how to do it.

You might, for example, want your session to do some of the following:

Let me first of all suggest that you DO use round tables, since so much research exists to support the reality that those work best for generating ideas as well as participation. Square tables have “best seats” and “worst seats” and anything other than tables generally does not allow people to take notes. Sitting “classroom style” is pretty much guaranteed NOT to generate much participation and engagement and most information delivered in this lecture-style will not be retained. Ugh.

I am going to assume that we have 60 people and 10 tabletops, thus you have a somewhat larger group since things are a lot harder with 60 people than they are with 15.

Some observations, ideas and frameworks:

For a variety of reasons, having 5 to 6 people at a table is the optimal size for generating involvement of all of the participants. It is hard to hide and hard to dominate. With smaller tabletops, one person might take over discussions and with larger ones, some people will simply not choose to participate much.

We discuss some research and general factors in this blog; I wanted to take a somewhat different approach for this post and get into more of the politics and problems, plus share a few tips on how to accomplish different group realities.

The standard technique is to put a senior manager with some of their direct reports. That is okay for small spans of control, but if there are 8 or 9 direct reports, not all of them can work with their boss in an efficient way without it being a committee-meeting. How do you choose who is in and who is out, and do you need to explain this to everyone? Why are these 5 in and those 5 not included, or does the senior manager need to work with both tabletops? Again, a table of more than 6 people tends to become a committee and all the direct reports being together can get “political” as each fights for attention as the group expands in size.

You can make seating random, but then there is often no randomness because people will generally choose to sit with people they know. The more senior managers are more likely to be together, the engineers will all go off by themselves and the salespeople will mingle with any and all;  many of the more junior people might select themselves out that way also.

As a room fills up, seat selection becomes more difficult, so the experienced people tend to get there early to stake out their seat at the back of the room (of if the president is speaking, at the table in the front!).

If you do the old “Name Tent” approach, there has to be some pre-selection of who / where and some degree of analysis and planning. Having sheets of seating and numbered tables and names requires a good bit of effort and arrangement, also. This gets pretty unmanageable when you get more than 60 people in the room and we sometimes run interactive sessions for 300 or more people.

Sometimes, I will just let the people enter the room and take a seat. I will leave the door open and just allow people to sit where they want. This is most true when there is food in the room, and people are showing up early to get fed and get comfortable. People do tend to sit with people they know. And they will move your carefully arranged chairs around which messes up your tabletop numbers…

Sometimes, we will keep the outer doors closed until it is time to begin and allow the rush to happen. My guess is that friends link up outside and then head off together to find a table. But there is some randomness as late arrivals struggle to find the remaining available seats and not that many chairs get moved.

If we really want random because we do want people to meet and work with other people, I will often do a simple re-shuffle. I will ask them to use The Point System to select a “Table Monitor.” The Point System is where they point in the air and, on the count of three, point to their selected person. It does not take long to do and it does add a bit of fun and laughter.

That Table Monitor is then told that their role is to not allow any of the people currently at their table to be at that table in 3 minutes. At the same time, we tell the people at the table to study those faces there and say goodbye, since they will not be allowed to be with each other in 3 minutes and that they should find different tables.

Then, we do the Point System and people ramble around looking for another seat. The minimal amount of time they have tends to all but eliminate a lot of old friends from sitting together or for them to collaborate and save seats or anything like that. We then give them a minute to introduce themselves to their new teammates.

If we are playing with different colored bandannas, you can give them to people as they arrive in the room or you can put them out on the tabletops. You can then ask the participants to form teams with people with the same colored bandannas or to form teams so that each player has a different colored bandanna (that is harder and some trading can be expected to occur for people to buddy-up). This same kind of thing can be done with colored dots on their name badges or different stickers or other things. You can also put stickies under the chairs they sit in, but that is a LOT more work!

My preferred way for very large groups is the Point System Re-arrangement Technique, since that takes only a couple of minutes even for 300 people. It gives a pretty good random mixing and you can do it for most kinds of assemblies. It simply requires that all participants have been seated first. (It does generate the risk that some might take things from their first table to their second, like a bandanna that they have already put around their necks, but that is relatively easy to address by planning to have some extra bandannas).

So, there is no one best way to do seating and you can go with the flow of things or you can adapt and adjust to get a “more better solution” that works but does not become intrusive.

Recognize that in the “more paranoid” cultures, people will also tend to question most everything that happens to them, from why they had to sit with those particular people to why they are not sitting with other people. That can be pretty funny to observe, if you are not in that group!

Hope this helps some. 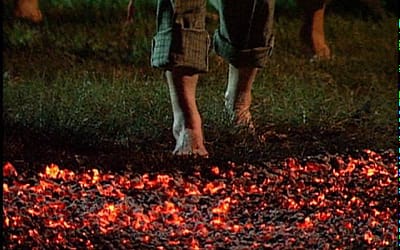