A Perfect Playing of Teamwork: Lost Dutchman’s Gold Mine

I first published The Search for The Lost Dutchman’s Gold Mine back in 1992 and we ran a lot of sessions to perfect the exercise and polish the materials. You can read a press release about the game’s 25 years here.

Not long after that, I started selling versions of the game to consultants all over the world.

In April, 2013, I got a note from David Simpson in Hong Kong responding to some of my instructional delivery notes that said no group had actually delivered A Perfect Play as shown in my debriefing powerpoint files. In that, I construct what the optimal play of the exercise would be for one team (that happens a good bit) and for a group of three teams collaborating together. To my knowledge, it had never happened. Something had always occurred to prevent a team from doing everything correctly.

Well, David announced to me that one group of three teams for Couch, running the game in Shenzen, China, was able to collaborate with each other as well as collaborating with The Expedition Leader to generate an optimal outcome. 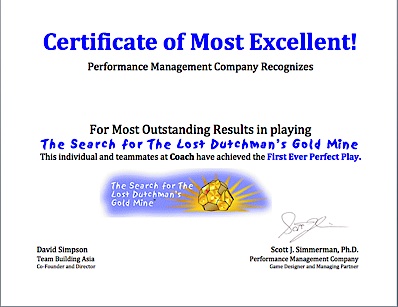 And, he had them so excited that he asked if I might generate an Official Certificate of Accomplishment for their efforts. Guess we gotta go with the flow and get that done. So, I spent a bit of time and put this together.

There are just so many possibilities to generate intrinsic rewards from accomplishments that it still amazes me that managers do not do more of that. We can engage them by asking what things need to be improved or fixed. We can dis-un-engage them by asking them what blocks their involvement and what we should be dong about it. What is so hard about all that?

Do you have any special ways in that you recognize high levels of performance over the long term? What kinds of things do you do that might sustain high performance and add to your effectiveness and team results?

Dr. Scott Simmerman is a designer of team building games and organization improvement tools. Managing Partner of Performance Management Company since 1984, he is an experienced presenter and consultant who has been trying to retire since July of 2019.