Dealing with Spectator Sheep — Because you can!

Spectator Sheep. You know who they are and what they do – they stand on the outside of what is happening and voice their opinions: Naaaaaaaa. Baaaaaaa.

Nothing is quite good enough and nothing works well enough and they are not satisfied with the current state of things.

But how about a little reframe around this problem…

One of the primary workplace motivators is the dissatisfaction with the way things are.

Similarly, some people are always looking for things that they can improve, and hope that others might feel the same way and that bosses are listening. But when they don’t, that builds up a residue, also.

Lastly, some people just “sort” things for the negative – they just look for things that are wrong rather than seeing things through those old rose-colored positive outlook glasses. And they say what they think; it just comes out flat and maybe negative. It is not that they are bad people, but they just see things differently. And they can often be frustrated because things could be better. 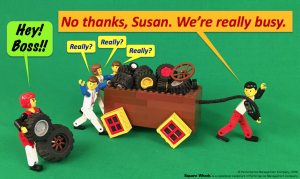 So, of course people can act like Spectator Sheep and surely you will hear the Naaaaaaaah, Baaaaaaaah refrain.

Here are some ideas for re-directing and engaging or re-engaging (my guess is that these same people used to be engaged and slowly dis-engaged over time):

1. Ask for and try to understand their perspective. Often, they just want to be heard and be respected. They may simply see things differently than you or others. Try to get some clarity as to what they are thinking. Plenty of research says that most workers in most organizations do not feel that their managers listen to their ideas. They may see something as a Square Wheel and wonder why things continue to thump and bump along the same old way…

2. Align them to your perspective. Make sure that the missions, visions, goals, objectives and expectations are clear (and make sure that your measurement and feedback systems are in alignment with the above!).

4. Obviously, request any specifics and details. “A Desk is a Dangerous Place from which to View the World” – the natural isolation of a manager is different from the hands-on day-to-day reality of the worker and congruence is necessary here. You need to know what they know and their thinking in order to generate better alignment and increased productivity and performance from them.

5. Focus on solutions and get them involved. If it makes sense, see who else in the workplace might share this perspective and maybe you can form a performance improvement team to share the perceived issue(s) and to help address this issue. Allow these people to feel part of the team and work to change their direction. “Nobody ever washes a rental car,” so get them actively involved with you on making improvements and implementing change. 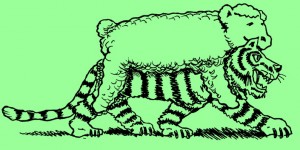 In my experience, spectator sheep are good people who are frustrated because they see things differently than everyone else (or most other people, some of which may also be dis-engaged but do not voice their opinions). Continuous improvement is a continuous process — view it as continuous continuous improvement — and understand that active involvement in problem solving and solution implementation is engaging and motivating for most people.

And at the very least you may quiet some of the negativity, if that person feels like their ideas have been heard and considered. 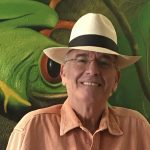 Scott is developer of the Square Wheels® images and the board game version of Lost Dutchman. The virtual, remote version of the exercise is about to be released (August, 2021)

Scott has presented his concepts in 47 countries and collaborates with consultants and trainers worldwide.

You can reach him at scott@squarewheels.com and you can see his profile at LinkedIn