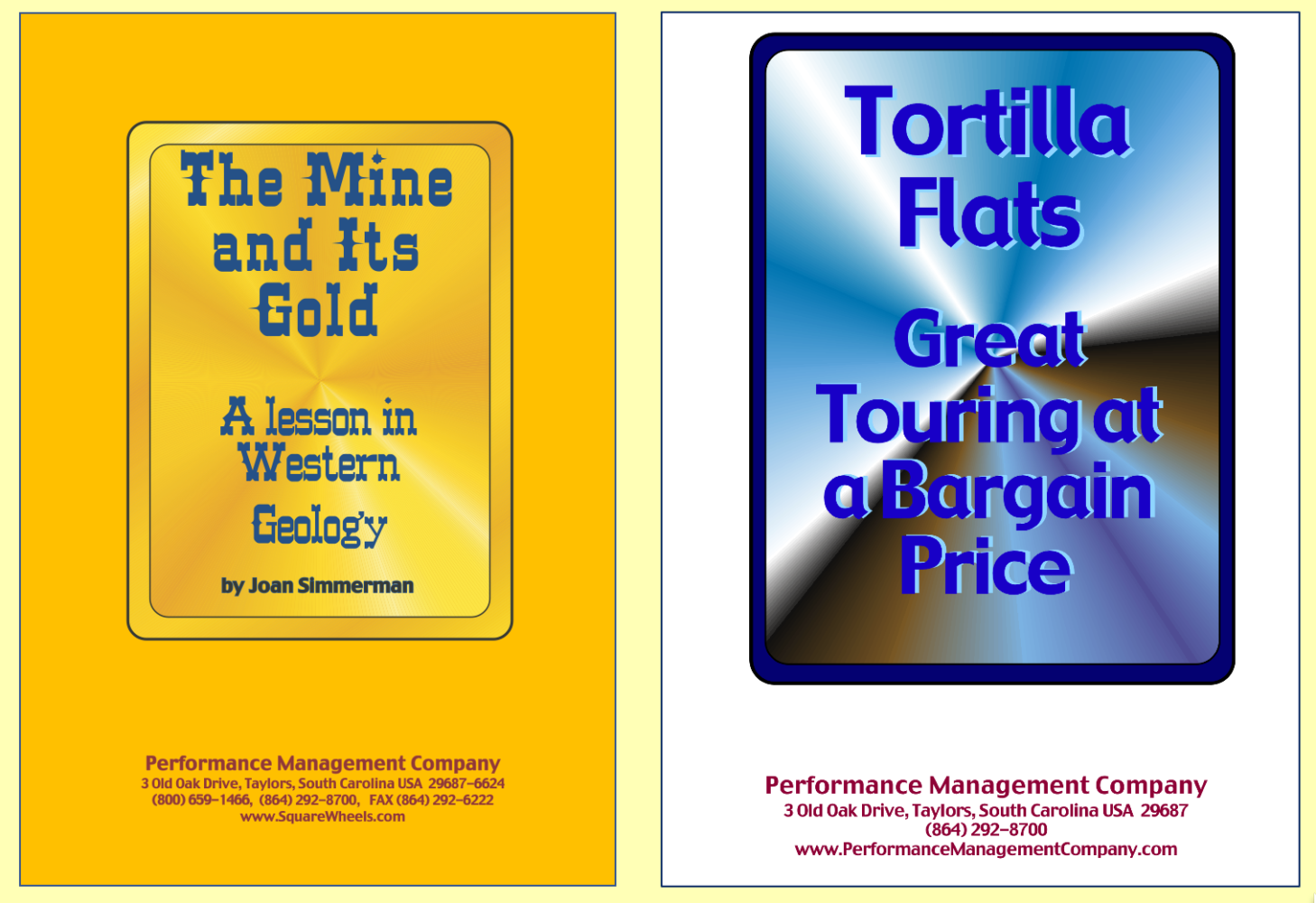 Below are some simple delivery tips for our team building exercise. While delivering The Search for The Lost Dutchman’s Gold Mine game is straightforward, new users often have simple questions about how that game works or how it can be enhanced. Two customers were asking me similar questions yesterday so I thought that a blog post might allow a little more leeway for an explanation and also allow those interested in the exercise to learn a bit more before they make a purchase decision.

There are different versions of the exercise that handle different group sizes, with the LD6 version handling up to 6 tabletops of players. If you are running a session with 20 players, you might choose to play with 4 teams of 5 or 5 teams of 4, for example. How do you decide?

This same kind of design decision disappears in larger deliveries of 50 or more people, since there will be plenty of tabletops! And, with very large groups playing in “pods” of 10 tables in each pod, you will often see competition happening between pods! And the game plays easily with 150 or 200 or even 300 people. It requires one Provisioner (banker) and one Co-Expedition Leader (tabletops manager) per 60 people or 10 tables of 6. All the needed training materials are included for these helpers.

Weather plays a role in the game because it makes the resource consumption during play a variable. If a team chooses The Low Country Trail to go to the mine, they encounter wet weather which creates mud and increases consumption of Fuel. And the number of Arctic Blasts that might occur, using up more Fuel and also Supplies, is also unknown. So, for a Battery, a team might choose to get one of the Weather Reports.

These Weather Reports are accurate, but only available on Days 5, 10 and 15 and are essentially useless since they are not available during the planning time before the game starts and play begins. While it is good information, it is not worth the cost. Each Weather Report COULD be shared between ALL of the tabletops if teams ever chose to do so — in my experience, they are very seldom shared. and teams often keep batteries and then do not use them during play. And they are ONLY available on those Days, not earlier.

The Videos are an essential part of the game design. Both are only available during planning time before the start of play and each contains resource cards and information that directly influences results. With 5 teams, we might play with 3 of The Mine videos available and 2 of Tortilla Flat. Thus, not all teams could directly acquire the resource cards and information about play. 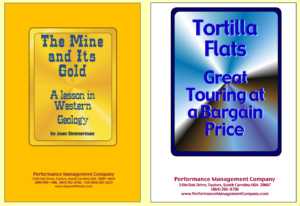 Teams acquiring a Mine Video get resources that can replace Tent Cards, and thus relieve some of the limitations. Each team gets $750 worth or resources in their Grub Stakes, which is “limited but sufficient.” Adding Cave Cards allows a team to get more Supplies and Fuel and to even be able to share resources with other teams if they are fully collaborating. (Sometimes they will trade/sell another team a Fuel for a Gold if that team needs fuel to survive!)

Teams acquiring the Tortilla Flat Video get Turbochargers that allow them to move twice as fast for the rest of the game, and they get Turbos that could also be shared with other tabletops with the same effect. With two TF Videos in play, you would have one available for every team if they are shared.

Gold Hand Cards have a couple of uses.

Most often, facilitators are choosing to use painted gold rocks along with gold mining pans for the tables to use to acquire gold when mining in The Lost Dutchman’s Mine. Teams like the heft of the rock and adding an inexpensive gold mining pan adds a nice touch to the theme of gold mining at the tabletop along with the toy jeep and bendable figures and similar. But especially with a very large group, moving about with a large quantity of heavy rocks and the bulk of the mining pans is a delivery choice. The option is to give each team a Gold Card to symbolize the gold being mined.

These Gold Cards can also be a simple discussion aid, which you can have printed very cheaply. I will often distribute them as:

We designed The Search for The Lost Dutchman’s Gold Mine to be a flexible experiential team building exercise to generate powerful debriefings focused on improving organizational results. It has a variety of clean metaphors about behavioral choices that players and teams make and generates measurable results showing the benefits of collaboration versus competition.

Some thoughts on Scarcity

One of our new purchasers ran her first game with senior managers in a workshop about Scarcity and how that mentality can affect things like collaboration and the optimization of overall results. She saw a, “hold the cards tightly” kind of thinking after their downsizing efforts and similar organizational trauma where some self-preservation thinking came into play that overrides a collaborative culture.

We often refer to this as, “My Team, My Team, My Team” thinking, which is not focused on interdepartmental collaboration or helping overall performance of the organization. 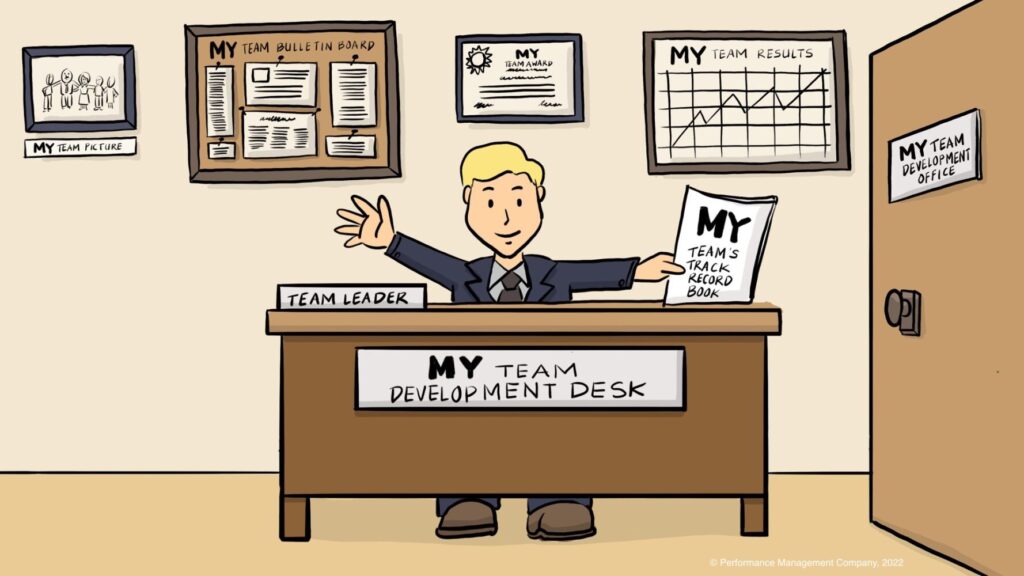 Scarcity Mentality can be seen when teams choose to get Spare Tires and Batteries before they leave, just in case. Spare Tires are a form of security for this “just in case” mentality and anyone asking the Expedition Leader if they might get one would find them advised they are not needed.

Scarcity mentality in the play of the exercise can revolve around the acquisition of Tent Cards and how any surplus Supplies and Fuel are treated by the teams. If one team is in dire need of a Fuel Card, they have been seen to trade one Gold Card (worth $2500) for a couple of $10 Fuel Cards. It is not uncommon and occurs when the survival of the first team is in question at the end of the exercise. This is NOT collaboration or interteam support and is readily debriefed with interesting reactions.

Of course, since the role of the Expedition Leader is to help teams be successful, that same team could also simply ask for assistance and you could give them a $10 Fuel Card to insure their survival and the contribution of their gold to the overall results. You, as Expedition Leader can simply carry some of these in a pocket to give to teams in need if they ask for help. Isn’t that what a Good Leader would generally choose to do? After all, $10 for a Fuel of $20 for a Supply Card would probably generate an additional $2500 in Gold!

If the teams are fully collaborative, they should share some of their Cave Cards and two of their Turbochargers if they got one or both videos. With a scarcity mentality, they would most likely hold on to all of those cards and NOT share them with the other tabletops. This dramatically and measurably sub-optimizes your overall results.

The exercise has many links to the themes of trust (within and between teams) with a strong focus on trust in the leadership and on collaboration between the teams. This is THE world-class exercise anchored to these elements, based on three decades of client feedback.

This text is a link to a press release about The Search for The Lost Dutchman’s Gold Mine teambuilding exercise and its 30 years of impacting people and performance.

← Strengthening Fellowship for a Healthy Workplace Contributing Improvement Ideas. The BOSS is the biggest issue → 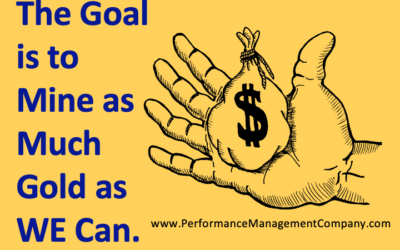 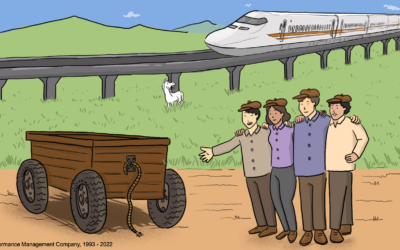