The recent and probably permanent shift to remote working has generated a number of issues around employee engagement, active participation and the implementation of ideas for improvement. While employee motivation has been an issue since I started working on performance improvement back in 1978, the lessening of direct contact between managers and employees and between employees makes it even more difficult for keeping people aligned to workplace goals and performance expectations. A friend called home workplaces, “dank,” and it has been hard to get that word out of my head…

And we see this clearly in the US these days as The Great Resignation. The numbers of people leaving workplaces is unprecedented, and companies are having a horrible time replacing the lost knowledge and experience. I won’t bother to share numbers here because they are shared in so many different places; I will blog more about these statistics in other posts.

Most managers seem to be so busy doing that they find it very hard be changing, putting in the work of trying to find some ways to do things differently. I mean, most managers find it hard to do all the things they are supposed to do now, much less do even more things to make improvements, even when some simple ideas exist. They are the main point of leverage for all performance management and they are overwhelmed.

One thing we need to do is strip away some of the current “responsibilities” faced by supervisors to give them more breathing room. Maybe this is relieving them of some report that is really not impactful. Or, it is taking them out of some unnecessary meetings. If you don’t know what to do, ask them. They can tell you. Cut away 3 or 4 hours a week of un-impactful responsibilities. Then, and only then, try to add some things that will generate some real improvement. (See “FREE THE SUPERVISOR” here)

What I would like to share a really simple concept that can have widespread, positive influences on the workplace, something that is easy to implement and that can generate the active involvement necessary to create active ownership of the results. The process could involve a few 20 minute online meetings with the work teams a week.

As a name, I call it Dis–Un–Engagement.

Consider the reality that one cannot actually “engage” another person, nor can one “empower” them. It is simply an impossible task because it is the other person’s choice to be engaged or empowered. It is the same with a team, in that there is nothing you can do to engage them if they are choosing not to be engaged individually or as a group.

But once those roadblocks can be identified, you can often work with them to minimize or remove them. That is why dis-un-engagement is a realistic activity; you can actually DO something to correct or improve it.

There are a LOT of tools and approaches that work to impact people and performance and which can remove roadblocks, directly and indirectly. And it is often the most simple and elegant that have the most impact. Keeping it simple keeps it useful and bombproof. Making the process visible and clear is even better.

If you look out at the world, you will see really bad statistics about engagement and morale and individual motivation and wonder about what the problems really are. But is engagement really that difficult? I think that most people are engagable and that this is not rocket science.

I’ve been playing with Dis-Un-Empowerment and Dis-Un-Engagement for thirty plus years — it is basically the idea of working and asking people and teams what things get in their way (generate a list of things that are roadblocks or that are un-empowering) and then working with that list to better understand the issues (as well as the individual beliefs and concerns) and then working with individuals (coaching) and teams to help manage them. It is really pretty simple when done as a facilitated process — Yelling and Telling will generate completely unsatisfactory results. You can check out a new blog that details this approach by clicking on the image below: 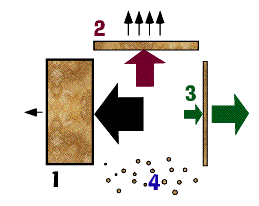 Our model for understanding and dealing with roadblocks to performance improvement. See the linked article.

Dis-Un-Engagement is a very similar concept with a slightly different focus. We can look at what workplace things are causing people to be un-engaged and simply work to remove them. The issues and factors are usually pretty clear and survey after survey gives you lists of the most common things that people say need to be done.

Engage-Ability is a simple little framework idea about how engage-able ARE people in the workplace.
And the answer is REALLY – they ARE really engage-able if we work at it. But we tend to make things so hard.

Consider the new employee and this simple factor: 85% of employee morale sharply decreases after their first 6 months on the job. (This is older data, but what has changed to indicate that this has improved?)
–Sirota Survey Intelligence, June 2006

That does not take a lot of analysis or conceptualistic cogitation. We DO things to people that generates “regression to the mean” and the new, enthusiastic employee is brought down to the average of everyone else. And a LOT of those people just do not seem to care, anymore…

According to an older analysis of its database of 5,700 companies representing 5,000,000 employees, Aon Hewitt reported that engagement levels indicate the workforce is by and large indifferent to organizational success or failure. That should concern us. A similar report from SHRM showed that employees were only moderately engaged at work, with an average score of 3.6 on a five-point scale. And according to Corporate Executive Board’s Human Resources Practice, only one in 10 workers were putting in high levels of discretionary effort. And there are lots and lots of current data pointing to the same basic problems.

My take on things is that workers are making educated and calculated decisions about their workplace and how they are treated. They are trying to be like everyone else, in many cases. They are looking to see if the management cares for them and values their efforts.

People ARE engage-able. People can get more involved and committed to accomplishing things. People DO like to work in teams, when risks are minimal and the potential (personal and team) rewards are good. That does NOT mean money compensation, but it does mean that the intrinsic motivators are present.

And Trust is the Residue of Promises Fulfilled.

Making improvements will happen on an individual basis and be connected to the interface of supervisors and workers. Managers need to ask more (based on a lot of data) and tell less.

This ain’t rocket science, folks. It is basically about treating people well, giving them respect, providing training and fair compensation for their efforts and doing what we say we will do as organizational leaders. People ARE engage-able!

What we need are more of the management team willing to take the time to ask and listen and involve. Caterpillars can fly, if they would just lighten up!

We have released an online version of The Search for The Lost Dutchman’s Gold Mine and we have redone many of our different sets of Square Wheels images and our toolkits for involving and engaging people in workplace improvement. If you are interested in collaborating with us, or using our products and tools for your performance improvement initiatives, send us a note. We are VERY collaborative as a culture. I want to build some solid and easy to use tools for managing remote workers and actively involving them in productivity and performance. 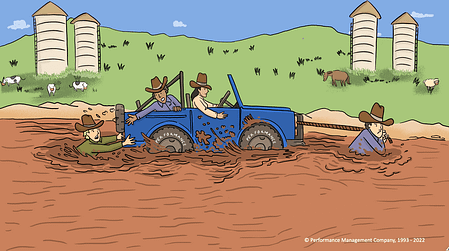 When you are up to your axles in mud, making progress is difficult.

Here is a 2-minute overview of the virtual team building game: https://www.youtube.com/watch?v=cE6gDtZymwk

How to Achieve Holistic Employee Well-being in Any Work Environment

The COVID-19 pandemic has drastically changed how people live and work. Organizations need to look...