Nobody Ever Washes a Rental Car – Ownership of Ideas

“Nobody ever washes a rental car“ is a phrase I have been using in workshops and in my writings since the mid-80s to describe the basic issues around ownership involvement and engagement. The basic concept is simple: people do not take care of things very well unless they have a feeling of ownership about them.

The reason I bring this up is funny, in a way. I had written a chapter for a to-be-published book and the editor makes a change to the text giving an actual attribution of this quote to someone who published an article in 2002 — and again, I had been using the quote and writing articles including in since the mid 80s. That was a bit insulting, actually, that she made the change in MY text without asking me! Just Do It is not always a good strategy when making changes to someone else’s hard work. Plus, she also added the comment that the phrase was actually “in dispute.”

Seriously? Of course, someone in a workshop will pipe up something like, “I washed one once” when referring to their own car-renting experiences, but under a followup question, they also admit that they did it because only they totally trashed the car and were worried that the rental agency would fine them or something (or that their spouse was so appalled by the awfulness of the exterior that he or she would not get into that car)!

The above explanation actually reinforces my point precisely. People do NOT take very good care of things they do not own.

The reality is that some people might actually wash a rental car, but they sure don’t take good care of them.

It reminds me of the old joke:

What goes faster than any police car, handles speed bumps and potholes like a Humvee, corners faster with more screeching tires than a drifting WMV, and can crash through small trees and bushes like a tank?

If you have ever owned a house you rented to others, you will also know precisely what I mean. Or, if you ever lent someone some of your tools or a book, you may come to understand that the ownership has just been functionally transferred… They may not see you as owning that anymore.

“But Scott,” you might say, “You write on issues of people and performance, about organizational improvement.
What is this “rental car” stuff?”

Simply put, you cannot expect the people to support you to buy into ideas for improvement and change unless they have some ownership involvement in generating those ideas or in putting together an implementation plan.

Here, we have a typical organizational reality – the leader pulling and people pushing and not much alignment, engagement or communications. They work. They sort of roll forward.

But here is another framework for the same basic situation: 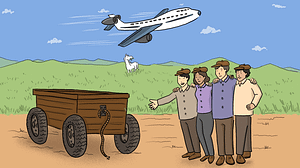 On the right, we have people actively involved in making improvements to the situation, with the obvious support of the manager and others. Taking time to be involved generates engagement, can help to implement better processes, and can generate peer support and even more organizational successes down the road. And they celebrate their improvements. Note, though, the horse in the background which could be another improvement and the plane, which could represent how all this gets done in the future! It is about continuous continuous improvement and that will also require engagement, communications and teamwork for implementation.

Lastly, let me end with the line-art illustration we first used in 1993 to illustrate this concept. The cartoon is actually named, Nobody ever washes a rental car, and it addresses one other issue of successfully implementing change and improvement. It looks like this:

In this situation which is fairly common, you might consider that the wagon is now beginning to roll downhill faster than the wagon puller finds comfortable. When people feel pushed, they generally push back and resist the change. It is ownership, again, but in a situation reverse to the above. Managers can also resist changes and ideas brought to them from the teams. It is a natural thing for those who are facilitating change and innovation.

If you are interested, we sell a simple and straightforward toolkit for impacting employee ownership:

Leadership is not a simple thing. So, Heads up! Engage them where you can.

Here is a 2-minute overview of the virtual team building game: https://www.youtube.com/watch?v=cE6gDtZymwk

← Simple thoughts on Rewards and Performance Perspective: Stepping Back from The Wagon →