The Christopher Columbus Award for Leadership

Jun 11, 2017 | manager as motivator, Metaphors for business improvement, motivation in the workplace, The Search for The Lost Dutchman's Gold Mine, The Square Wheels Project

We were playing around with ideas for “Leadership Awards” a few years ago and I had my artist, Roy Sabean, craft up one for me. Since that time, there have been a lot of pretty negative articles written about this guy and a lot of discussion about removing his name as a national holiday. You can get into the history of why that day was named with a simple search…

Anyway, we have this award that you should find humorous. And it could certainly be a common one for a lot of people, but that is up to how you think about things.

So, here is the trophy and award and here is a poem for your enjoyment and edification! and the poem to support the thinking:

Oh, and there is also another pretty funny thing about all this. There is a statue erected in his honor completed in 1888 in Barcelona, Spain. The belief is that he was born in Catalonia and thus Spain could claim him. At the top of the tall monument at the base of las Ramblas, he is pointing. People say that he is pointing to America, but that of course is not true. He is actually pointing south-east toward the city of Constantine in Algeria. Even in statue form, he is not sure where he is, apparently.

(I was there; saw the statue. And I should have taken a picture, maybe… Ah well.)

Have FUN out there, and try to do something to clarify where you are going, why you are going there, and how others can support you on your journey. Take some oranges along, too, and prevent scurvy!

At Performance Management Company, we play with metaphors and experiential learning tools such as our Square Wheels® images and toolkits and our team building games. Very solid stuff, very high rated and impactful, and relatively cheap.

One of the best teambuilding exercises in the world, as rated by his users, is The Search for The Lost Dutchman’s Gold Mine, which focuses on leadership, collaboration, alignment and focuses on implementing the collective performance optimization ideas.

Connect with Scott on Google+ 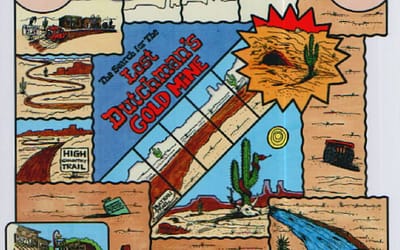 In my LinkedIn feed was a blog by Jacob Morgan about...

Can you IMPROVE a Square Wheel?

A casual note in Slack to me from our marketing guy Amit got me thinking, so I responded and then...