Too Busy and Somewhat Disengaged – an illustration of workplace reality

For the past 25 years, we have been playing with various Square Wheel® images around people and performance. And a number of people, including myself, have commented on Hakan Forss’ reframe of the Square Wheels theme into LEGO. His works were what actually got me moving from the line art that we have been using since 1993 into representing scenes and situations with LEGO characters.

Joan was playing with a new newsletter and we just took a bunch of new pictures. I then imported into powerpoint to add some conversational bubbles and we now have two versions around the workplace issues of being both too busy and somewhat distanced from reality.

For many wagon pullers, they work hard but are not always connected to the work at hand.

YOUR thoughts on which illustration you like best would be neat to see. Joan says I say, “Really?” too much, to which I generally say, “Really?”

And my more preferred version, which in my view of things, represents a pretty common reality about thing seem to work in most organizations: 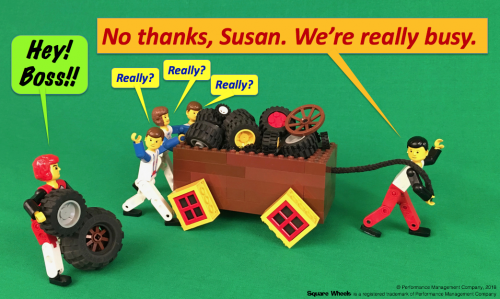 And how might this really reflect reality in your workplace?

Dr. Scott Simmerman is a designer of team building games and organization improvement products. Managing Partner of Performance Management Company since 1984, he is an experienced presenter and consultant who designs simple, powerful learning tools.

You can reach Scott at scott@squarewheels.com
See his poems and performance haiku poems at www.poemsontheworkplace.com

← Legacies and Consultants - Will We be Remembered? MORE on being "Too Busy" to implement new improvements →